Strangely enough, but cats are really very frightened when they see an unexpectedly appeared cucumber. Also they scared of a zucchini and an eggplant. Cats literally soar into the sky and rush that there are urine, leaving people wondering why are cats so scared of cucumbers.

It all began with a similar video, which already flew all over the Internet.

Fun, isn’t it? 🙂 Although, for poor xats this is a great stress. It’s like putting a huge, hairy spider next to a man. But are they really afraid of cucumbers? And what is the reason for such a violent reaction in the performance of felines? Let’s try to figure it out.

Why cats are so scared of cucumbers?

The cat is frightened only if it is imperceptible to put the cucumber behind it when it doesn’t see you and is distracted by something else. For example, by eating or licking the genitals. A big role here is played by the surprise factor.Cucumber can remind a cat of its natural enemies in nature — a snake or a hose of a vacuum cleaner. And here they also crept so imperceptibly that it is impossible not to jump above the head of the owner. 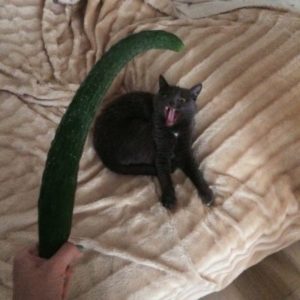 Cucumber — an ingredient of shaurma. As you know, many dishonest businessmen give their stalls with shaurma made from any meat exept chicken. And cats are afraid most of all to be the replacement ingredient. If a cucumber is next to the cat, he run in panic, thinking that now they will start to cook shaurma. Read more in the article: what to do if I’m Shaurma.A cat simply likes cleanliness and order. And he is frightened by such a blatant mess in his own house, when a cucumber is lying around the room. And this is cat’s house, not yours.

But remember, do not abuse these jokes over your pets, without hiding your shoes beforehand. Revenge can be cruel, and your sneakers can suffer from a cat. If it’s already too late, and the war has started, read: What Should I do if The Cat Wants to Kill me.

We hope our article has helped you to better understand your furry beasts. At least now you know why cats are scared of cucumbers. Live with cats in peace and harmony, and they’ll give you a lot of warmth and mum!

Does your cat run faster than you? Do it! Read: How to Start Running.Do you have 10 cats at home? We offer an article How to Get a Girl.Are you planning to start 10 cats? First, read What to do When There’s Nothing to do.